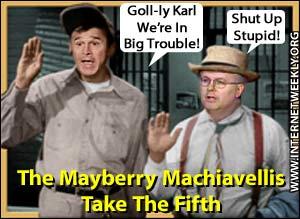 Even the Associated Press isn’t falling for President Bush’s attempts to now move the goalposts on the Karl Rove leak case. Fresh off the wire:

President Bush said Monday that if anyone in his administration committed a crime in connection with the public leak of the identity of a CIA operative, that person will “no longer work in my administration.” At the same time, Bush yet again sidestepped a question on the role of his top political adviser, Karl Rove, in the matter.

Bush said in June 2004 that he would fire anyone in his administration shown to have leaked information that exposed the identity of Wilson’s wife, Valerie Plame. On Monday, however, he added the qualifier that it would have [to] be shown that a crime was committed.

Q: Given — given recent developments in the CIA leak case, particularly Vice President Cheney’s discussions with the investigators, do you still stand by what you said several months ago, a suggestion that it might be difficult to identify anybody who leaked the agent’s name?

THE PRESIDENT: That’s up to –

Q: And, and, do you stand by your pledge to fire anyone found to have done so?

THE PRESIDENT: Yes. And that’s up to the U.S. Attorney to find the facts.