I love my flag 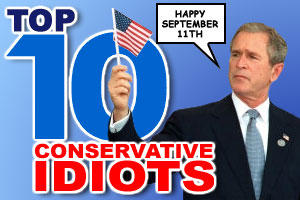 This week's DU The Top 10 Conservative Idiots. It's a riot. 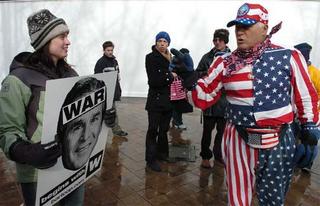 Since today is Independence Day, we should probably mention that two weeks ago the House of Representatives endorsed a constitutional amendment to ban flag desecration. This is the umpteenth time the House has tried this, and so far the measure has never made it past the Senate. But in these times, the flag desecration amendment may actually stand a chance.

So the next time you see someone flying a ratty, tattered Stars & Stripes from the window of their car, make sure to let them know that they are un-American. Next time your neighbor hangs Old Glory in the front yard and leaves it there for the wind to rip to pieces, remind them that they are helping the terrorists. Next time you see someone wrapping their head or their tits or their ballsack in the Star Spangled Banner, tell them that not only are they desecrating the flag, but they look like a clown.they look like a clown.

And the next time you see someone burning a flag in the street... ha ha! Yeah right - that happens all the time. - DU #7

Probably the most ignorant, unpatriotic BS I've ever seen.

And the sad part is, you NeoLibs actually believe this trash.

"Probably the most ignorant, unpatriotic BS I've ever seen."

Is it satire or is it reality?...it's hard to tell these days. Keep driving with your yellow ribbon magnet you moron.

Is that a red, white, and blue fanny pack?

Christ, what a conservative faggot.