The best of friends

Some say you are judged by the company you keep.

Scanlon, a former aide to Representative Tom DeLay, is scheduled to appear today in U.S. District Court to present a plea bargain with the Justice Department likely to lead to his cooperation with investigators. His testimony would ratchet up the pressure on Abramoff and aid prosecutors in widening the investigation to members of Congress, such as Republicans DeLay and Representative Robert Ney of Ohio.

As investigators get closer to Abramoff, they may also get closer to DeLay, said Craig McDonald, director of Texans for Public Justice, an Austin-based group that has called for a special prosecutor to investigate DeLay.

``It's likely that Abramoff has lots of dirt on Tom DeLay,'' McDonald said. ``The further Abramoff sinks into trouble, the more likely he is to start pitching that dirt.''

DeLay, 58, who once called the lobbyist ``one of my closest friends'' and went on an Abramoff-sponsored trip to Scotland in 2000, stepped down as House majority leader after being indicted in September in an unrelated campaign-finance case in Texas. 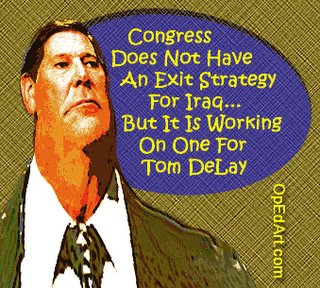