Texas Gov. Rick Perry (R) says that it's just a coincidence that he and eight other lawmakers received donations of $5,000 each from Merck lobbyists just a few days before mandating the drug giant's HPV cervical cancer vaccine for all females in Texas ages 12 and up.

"There's been a lot of pressure about the implications of vaccinating young girls against sexually-transmitted diseases," says CNN's Ali Velshi in the video below, "some people thinking that that encourages promiscuity at that age."

He reports though that "this thing is coming undone by word, rumor and report of connection between Rick Perry's office and Merck."

The main lobbyist for Merck previously worked as Chief of Staff for Gov. Rick Perry. Several other states are considering making the vaccine mandatory, thanks in part to Merck's aaggressive lobbying.
Posted by Fred at 3:55 PM No comments:

I'll be following him closely.

New Mexico Gov. Bill Richardson raised at least $2 million for his presidential campaign, a tally that puts him in good standing in the race for the Democratic nomination. 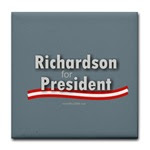 Yes, the man wants all out war.

Finally, here's the debate Bush is aiming for. Today Bush asserted, very firmly, that he knew beyond a shadow of a doubt that Quds was responsible for the EFPs (and other weapons) killing Americans in Iraq. In purposefully muddying the waters of the evidentiary debate, Bush moves the terms onto more favorable ground. Now the right-wing wurlitzer will start pounding out the patriotic notes of this argument, an argument Democrats will be hard pressed to win: a.) the weapons are in Iraq, b.) the Iranians gave them to the Iraqis and c.) I have a duty as president to protect American lives. Thus, we attack Iran. Questioning the evidence is to put American troops in even more danger.

That's Bush's game. How do we respond?- The Agonist

Bush has lost all credibility so what he says may not actually penetrate the average person as it once did. Except for maybe the Rush - Hannity - Fox type who are gullible enough to believe Mexico would attack us tomorrow if Bush said they would. Because you know...Iraqis and Mexicans...they all look the same.

Failure to question the evidence is what got us in the mess we're in today. So congress what are you going to do? As you debate a non-binding resolution...Bush just motors on. The American people have responded by an overwhelming support of getting the troops out of Iraq as soon as possible. America deserves that we question the evidence and America deserves proof that our president is not lying us into war again. It's really that simple.
Posted by Fred at 12:43 AM No comments:

A short documentary of The Judy's 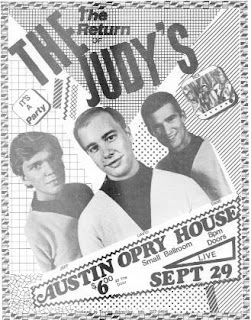 If you were in Texas in the mid 80's and you were in the know of good music...this band was the shit! Here's a link to bring back some memories for some of you...

If only America could get a trial seperation 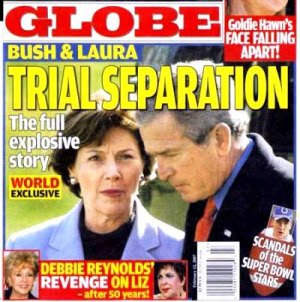 How exciting for the Dixie Chicks to look in the camera and basically day "F" you to the all the folks who thought they threw them down the river over the over-hyped Bush remarks a few years back. I only wish Al Gore would have presented the Grammy. The Fox loving 28% country music program directors still can't get past poor George getting his feelings hurt from three smart women from Texas.

"Most country stations aren't playing the Chicks, and they aren't going to start now," said Jim Jacobs, owner of WTDR-FM, a country radio station in Talladega, Ala.

The awards might have the opposite effect, sparking another radio backlash against the group. Country broadcasters said Monday that the group's five Grammys show how out of touch the Recording Academy is from the average country fan.

"I think (the listeners) are outraged," said Tony Lama, program director for KXNP in North Platte, Neb. "This is rural, conservative America. They are just disgusted."

Silly how they would want to raise this issue again. I have never been a fan of country music and now I understand why.

Country radio may not be ready to embrace them again, but the Grammy runaway suggests that a significant portion of the rest of the country has come around to their way of thinking. The president's approval ratings are down, and his party was ousted in the midterm elections.

US alleges top Iranian officials ordering bombs to Iraq; however, Iran ambassador to United Nations says it's all a fabrication. MSNBC and The Peninsula have the contradictions. That is the front in Iraq, but the Guardian says that the efforts to attack Iran are already at an advanced stage despite the administration's denial. Along with the depolyment of naval ships, extra missles and minesweepers have been sent to the region; meanwhile, oil reserves are stockpiled. To be continued...
Posted by texmex at 5:23 PM No comments:

The good folks at the Fort Bend Democrats are having "A Tribute to an American Family -An Evening with Rick and Melissa Noriega". Melissa Noriega, is a candidate to take over the seat vacated by Shelley Sekula-Gibbs. From everything I've heard about Melissa, she would be an excellent improvement to this Houston City Council seat. For information on the Friday, February 16th at 7:00PM event in Fort Bend, County... visit here.
Posted by Fred at 10:13 AM No comments:

This HPV vaccine mandate fiasco has brought out the best in folks... Again found in BOR.

Again this executive order is wrong, wrong, wrong. No matter how the folks who enjoy the Government sticking needles in you try to spin it...it just doesn't jive. Not here, not now, not ever.
Posted by Fred at 12:08 AM No comments:

Richard Morrison: I just can't agree with the Gov. on this one

With comments like this, Richard Morrison would have made a great Congressman for District 22.

I am also very uncomfortable with the Gov't mandating anything regarding my children's bodies. It seems at first blush like an argument that I have heard in politics before.

I agree that the drug should be available and should be affordable, especially for low-income families.

I just can't agree with the Gov. on this one.

I really dig this post on BOR this evening.

With all due respect to Chris Bell, and others who wish to champion Rick Perry's executive order forcing parents to vaccinate millions of young Texas girls against the human papillomavirus (HPV); but I strongly condemn the decision because it was done for all the obvious wrong reasons in all the obvious wrong ways.

Executive decision making without the advice and consent of the legislative branch of government is dangerous precedent to set. Especially when it includes essentially using your power as governor to play the role of a father for millions of Texas parents and their children. How far are Texans willing to go in allowing state or federal government to make such personal decisions as individual child healthcare? Are we really that gullible to allow this much government intervention into personal decision making? Read more...

There are those who say that this is nothing but a social conservative movement against Perry's decision. I can assure you and with the track record of TSB that statements like this are shallow at best and absolutely untrue. Yeah yeah yeah, we know a little bit about the truth here at Truth Serum Blog.
Posted by Fred at 10:58 PM No comments:

I'm surprised at the lack of press this story is getting...

Despite Libby's prior assertion that Russert revealed to him that Plame,the wife of former ambassador and Bush critic Joe Wilson, worked at the CIA,Russert "rebutted that totally," CNN's Brian Todd reported.

Russerttestified "that Valerie Plame Wilson never came up, there was no mention
[Wilson's] wife worked for the CIA," Todd said. "He never told Scooter Libby anything about that, that the entire subject was never broached in thatconversation."

We won the election damnit!

TSB is a big proponent of keeping a watchful eye on Big Pharma and their attack on the most vulnerable...our children. We here at TSB strongly disagree with Rick Perry's HPV Vaccine Mandate for 6th grade girls. We are not on the side of those who oppose the forced vaccine who claim the mandate will give young women ever more reason to have careless sex. We find this to be complete and total hogwash. The fact is there is questionable safety to recommend making this vaccine mandatory as it is less than one year on the market. The fact that Merck, not the vaccine community, has had an aggressive role in pushing for this mandate should scare the shit out us of all, especially for a drug that is yet to be proven. The financial gain for Merck is astronomical especially for a company plagued by lawsuits for withholding critical safety information to doctors and patients about their popular painkiller drug Vioxx. What the hell was Perry thinking?

We urge all to write Governor Rick Perry and your local state representative and oppose the forced HPV Vaccine on girls in Texas.

I am writing to urge you to rescind your Executive Order to mandate HPV vaccine to girls entering 6th grade. As a mother of a four year old girl I strongly oppose your order. What was your rush to sign this mandate? Why not let this go through the legislature as a bill so it could by discussed and debated. Lawmakers should be able to hear from doctors, scientists and patients before such a sweeping mandate is ordered.

There is too little long term safety and efficacy data, especially in young girls, and too little labeling information on contraindications for the state to mandate this vaccine. Gardasil has only been in use since June 2006 and there are already adverse events filed with VAERS. Co-administration of Gardasil with other vaccines has not been studied. An adviser to the American Academy of Pediatrics said he thought it was premature to recommend making it mandatory. "I think it's too early," said Joseph A. Bocchini, who chairs the academy's committee on infectious diseases. "This is a new vaccine. It would be wise to wait until we have additional information about the safety of the vaccine." The duration of immunity from the vaccine is unknown. In clinical trials, the vaccine’s effectiveness was only followed for four years. We know from the CDC that the incubation for the HPV virus is about twenty years and the median age of women diagnosed with cervical cancer is forty-eight. Therefore, no claims to proof of cervical cancer prevention by vaccinating preteen girls should be made. I do not want my daughter to be an “experiment” for the HPV vaccine.

I feel your order is a huge abuse of power. Many residents of Texas are not in support of your mandate. It must be rescinded and allowed to pass through the proper legislative channels.


Truth Serum Blog
Posted by Fred at 11:11 PM No comments:

Here's to my family in New Orleans 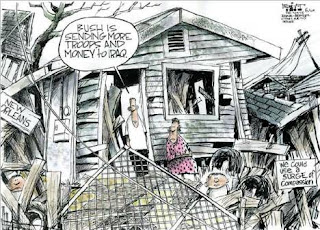 I do hear that you can now get a great taco in the crescent city, thanks to the newly developed taco stands. You see, us Mexicans are good for something. Oh yeah, I forgot, we're also rebuilding the city!
Posted by Fred at 1:13 AM No comments:

Enemy of The State - Cartoon Network 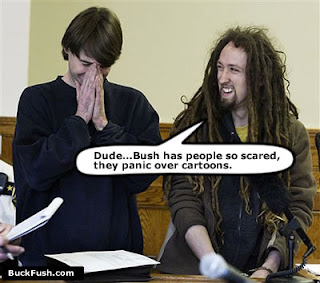 Are we the laughing stock of the world or what? The people who ought to be questioned are the Boston city officials for creating this over reaction of a terrorist threat.
Posted by Fred at 1:02 AM No comments:

Really folks...so much has happened in the past month that I just don't where to begin. The sad part is George Bush is still in office. But that's OK, the longer this chump (Cheney) remains in power the more the "Half glass is full". What?