While dusting off the keyboard I decided to make a switch to a different Blog creation application. The url truthserumblog.com will remain the same but no longer points to the Blogger site.

So please click on over to truthserumblog.com and save the link. Thanks.
Posted by Fred at 8:57 AM 12 comments:

Rick Perry Lied about the Distance between himself and the $4.5 Million Handout

Yep, October 19th on the University of Texas campus.
Posted by Fred at 5:55 PM 3 comments:

Perry is hiding finance records and stealing from you

This is exactly why the Republicans love this guy.  It's just another day at the office of Rick Perry stealing the people's money.


But Perry has some nerve in so stridently calling for White to come clean and even refusing to debate White because he hasn't released income tax returns from more than a decade ago.
Perry is today hiding financial records that are much more recent and more relevant to Texas taxpayers.
He's refusing to tell us to whom he is giving millions of dollars of our money.
Last Sunday the Dallas Morning News reported that the state's Emerging Technologies Fund, which is controlled by the governor, has awarded more than $16 million to start-up companies whose investors have given hundreds of thousands of dollars in campaign contributions to Perry. According to the Morning News:
ThromboVision Inc., a Houston company, won a grant for $1.5 million. Investor Charles W. Tate has given more than $424,000 to Perry.
Terrabon Inc., also of Houston, was awarded $2.75 million. Investors include Perry friend Phil Adams, who has given the governor at least $314,000.
Gradalis Inc. of Carrolton received $1.75 million. Its investors include Dr. James Leininger, who has given more than $264,000 to Perry.
Carbon Nanotechnologies Inc. of Houston was awarded $975,000 from the fund. Investors included William A. McMinn, who has given $152,000 to Perry.
There were more.

Now all you Texas Tea Party people...do you approve of this or are you a bunch of hypocrites?

Did I mention the $21 Billion deficit?

Enough to make the worst person in the world....

Bill White is one fine "Padre"

The year of the witch


Houston, Texas (CNN) – Bill White, the Democratic nominee for governor in Texas, compared Gov. Rick Perry on Wednesday to an  imature school child who refuses to take responsibility for his actions. 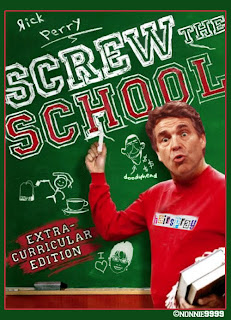 
Perry handed out $16 million in taxpayer dollars from a high tech fund to companies tied to his top political contributors.

"This is the kind of thing a Public Integrity Unit ought to investigate. If the fundraisers promised or suggested that grants would go to political donors and then that happened, that's criminal, plain and simple," said Dick DeGuerin.

DeGuerin has defended Senator Kay Bailey Hutchison and Representative Tom DeLay and was recently named one of the 25 Greatest Texas Lawyers of the Past Quarter Century.

The Texas's prison system is overcrowded, but I'm willing to let a weak marijuana case go home and throw in a $16 million thief.
Posted by Fred at 11:33 AM No comments: